Women in Business: Are They Taken Seriously?

When I left the corporate world, I was scared. I believe that men get scared of the idea of losing their stability as well. But I think they are more proactive seeking help. When I told people about my idea of creating a copywriting enterprise, they looked at me in a weird way. I remember going to the first local networking event. It was full of men. I got scared. While I was pretending to be full of confidence, I was not. I wanted something men had. I was not sure what it was, but they did possess something that women would never have. Not even those who looked as tough as men. I had to start conversations, approach others during the break. It was hard. I had to find out why.

According to the Office of National Statistics, more women start up a business every year than men. Still, measuring the entrepreneurial activities, the statistical figures show that men are in the lead. Does this mean that most women are doomed to failure in business? In every region on Britain, there were double as many self-employed men than women between 2000 and 2008. Then I realized. The old stereotype of “women at home” was still working. The majority of women started a business to spend more time with their family. Men’s motivations were different. This means that women can’t deny what they are: mothers, caretakers, home-organizers. They take this responsibility seriously.

Women run homes and do business

Wanting to spend more time with the family, however, does not mean that women take business less seriously. It, however, restricts the industries women can work in. While a man can become a builder, work away, or a management consultant travelling all over the country, a woman cannot do that, as she is responsible for the family’s welfare. She is the one who does the school runs, takes kids to clubs, and cooks. It is, therefore, understandable that women are not taken as seriously in business as men. They need to balance between work and family: something that men would not even consider an option (except for single dads, who set up a business for the same reason as most women).

The Problem with Confidence

According to Women Entrepreneurs UK, many female business owners still struggle with confidence. This might be the answer to the low number of self-employed women, and the high number of new female business start-ups. Women have the “what if” carved into their thinking, men rarely do. I felt this lack of confidence when I entered the room full of male business owners. I felt it when I dealt with highly assertive male clients who were trying to make me feel inferior. While I am slowly overcoming my fear of failure and lack of confidence, I know that I have settled with lower pay, failed to represent my interest, and approach companies for more assignments because of this.

If you are a woman in business, you should work on building your confidence. As the article of Women Entrepreneurs UK states:The only thing is that because the ratio of women in businesses is low, there is a much greater degree of apprehension that shrouds them. And that gives birth to the fear of failure. “ Don’t let this affect the future of your business. Look into the mirror and say to yourself: “I am a woman. Nothing less of a man. I can build a business”. Keep repeating it until you truly believe, and together we can change the trends of statistics.

Learn how to become best friends with yourself 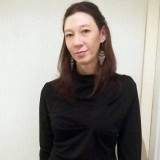 Laura Farkas is a creative professional. She has been running her SEO copywriting business for three years, managed to re-discover her purpose, and leave the corporate world behind for good....