The Importance of Slowing Down

Three years ago my life was moving too quickly. I had two babies then. One was a mild mannered but finicky two year old, the other a quietly demanding six month old. They are both boys and both loved beyond words.

But it wasn’t long after I started parenting two children that I realized my life moved twice as quickly as before. There is something about the way raising children saturates your life that makes the axis of our world just spin faster. Sharply, methodically, my world was blurring right before my eyes. One day becomes two days. Two days becomes an entire week that has passed. Months are mushing together. Soon entire seasons are sailing right by and I was always looking behind me trying to desperately grasp whatever we had missed in the madness of living so quickly. It felt like the desperation of trying to catch a piece of trash that has been thrust up into the air on a windy day. I could leap and crouch, run like a mad woman but my fingers always just barely grazed the edge of the runaway garbage before the wind swept it just out of reach. Except it wasn’t a piece of trash in the wind. It was my runaway life. And I wanted to run away from it.

There was always something…

Magnets on the refrigerator holding up events to attend

Do we even have a babysitter for date nights?

The things we want to do

The things we need to do

The things that never get done

All of these endless tasks wind themselves up into a twisted twine, like Christmas lights pulled out of a dusty storage bin. And what in the heck is a more overwhelming feeling than that? By the end of each day my husband and I collapsed on the couch. Or sometimes just curled up there with whatever energy we had left. With our numb minds we’d put our feet up if we could muster the strength and zone out to the television, all the while still grasping at the straws of a day already dead and gone but at the same time bracing ourselves for another day tomorrow.

After a while I realized; I don’t want to brace myself for tomorrow.

I was bracing myself just to keep from blowing off of my own wildly spinning world. It wasn’t fair to my kids, or my husband, and it wasn’t fair to me. I didn’t want to brace myself for tomorrow because it wasn’t just ruining tomorrow, it was ruining today. I decided we had to slow down.

To slow our world down, I decided to focus on the tiny moments. The little things that never made it to a magnet on the fridge with a due date, weren’t recorded in a baby book, and didn’t keep us up at night with worry or excitement. To slow down I would have to recognize the moments that essentially didn’t seem to matter. Everything tiny, everything you had to squint to see, those were the slow moments that were going to ground us in a world that spun at our own pace. A pace that we set ourselves.

I began writing and chronicling the little pieces of our life. I lowered my standards for my family and our schedules. We went to the events that we could, and passed when we couldn’t. I didn’t create elaborate Pinterest boards, and I began throwing the tamest birthday parties you’ve ever seen. Sometimes the house is a mess. Sometimes it isn’t. When my husband wants to take the boat out with his buddies for the evening, instead of clinching my chest to hold back the heated words “don’t you know how many things I need to do!” I sigh and say “have fun.” I don’t sign the kids up for activities unless they ask. When one of them says “I don’t want to do anything this summer, can we just relax?” With a huge shrug of my shoulders I say “sure!”

By slowing down, we appreciate life. By appreciating life we slow down.

With slowing down comes appreciating. And my past three years of writing has captured a heaping helping of appreciation. We appreciate the little victories of life, and the big ones too. While we aren’t perfect, we’re more in control of the speed of our world now and I no longer brace myself for tomorrow. I can’t. I’m too comfortable sinking into the mellowness of this…moment…happening…now.

A Teenager trapped in a Toddler’s body 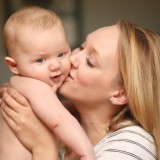 Jess is a writer, photographer, storyteller, and peanut butter and jelly sandwich maker.