I am what you might call a ‘Kardashian-phile’. I could spend hours scrolling through Instagram and Twitter, before binge watching KUWTK and I’ve even been known to simply type ‘Kardashian’ into Google search, just to read some news. I appreciate the entire family; both from a reality TV junkie perspective and the social psychologist in me.

Kim Kardashian, literally, broke the Internet a number of days ago and as usual, people had their two pennies worth to put in and couldn’t WAIT to Tweet, update their statuses and skywrite their opinion about her full frontal in Paper Magazine. The issue I want to address here, is the opinion that the Kardashians are vapid, talentless, undeserving Americans. Yes, they may be vapid; none of them could be the 2015 intake into Mensa, nor could they win a Nobel Peace Prize. None of them have breathtaking singing, dancing or acting talents – but I do not believe they are undeserving of their brand, money or fame.

This is where someone would pipe up and say ‘they’re only famous because of a sex tape’ – which in the global sense is true, BUT the Kardashians were a family already in the limelight as their late father defended OJ Simpson in his high profile murder trial. So in the local sense, they were celebrities long before Kim’s sex tape catapulted them to the top of the A-list. Something that also bothers me when people are so quick to point out it’s all based on a sex tape, is that they fail to mention it was the ultimate betrayal of a young women’s trust. Let’s briefly mention the recent nude leak scandal that affected a great deal of young women. As women, we were all quick to defend them, but somehow Kim’s sex tape was a degrading way to enter the spotlight? Does that make sense to you? If a sex tape of me was ever publicly leaked and reached the volumes of people that Kim’s did, I would never leave the house for fear of ridicule about the freckle on my left bum cheek (really). We should celebrate the fact that they utilised a humiliating and demoralising experience into the greatest method of advertising, ever. To do this, takes indefinable amounts of courage, pride and perseverance; qualities that are not dependent on level of education or book smarts but unshakeable confidence and that alone is a reason to celebrate this family.

The feminist in me, is torn between cheering the family on for their blatant use of sex appeal to fill their pockets and feeling down heartened that society places such on worth on someone’s physical attributes that nudity was Kim’s only choice. But the averagely weighted, larger-than-average-nosed woman in me feels that if I were to look even remotely similar to Kim, I’d be doing the exact same. In fact, I don’t think I’d even wear clothes; I’d simply be naked, all the time.
Let’s quickly also circle back to the comment I made before about the recent nude leak. Perhaps we should question why we have hounded Kim for posing naked and rocking a top knot, consensually and respectfully but many curious individuals LOVED the fact that young women were having their nudes leaked non-consensually all over the internet? What’s sexy and funny about no consent?

A lot of people seem to share the thought that because Kim is a mother, she should therefore automatically become a prude and have ‘more self respect and respect for her daughter’.
I, in fact, think the opposite – I think this shows the upmost respect for herself and her daughter because she feels comfortable enough to reveal herself in the most intimate way and I hope in 15 years, North looks at the photos of her mum like this and understands that her mum paved the way for so many women to feel confident about themselves no matter how many ornaments they knock over with their bums. An important lesson I also hope her daughter realises is that no matter what life throws at you, whether it be a leaked sex tape or emergency tax, you can use it to the best of your ability to make phenomenal things happen.

(Okay, maybe not the emergency tax… there is no way that’s a good thing…)

Are you making yourself invisible? 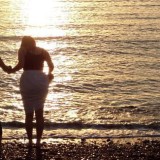