It hasn’t been easy…

So, I’ve been AWOL for some time now, in almost every one of my writing capacities. I could say it hasn’t been intentional, but it hasn’t been entirely unintentional either. I’ve spent the vast majority of the last 12 months on a massive journey of personal development. To say my whole life has changed would be an understatement. It was not planned, it was not pre-empted, and it certainly wasn’t expected, yet it has been the most gratifying (and at times difficult) journey that I have ever been on.

Only one thing has remained a constant in this last year and shall remain a constant in the years to come; first and foremost, I am a mother. But, it is not unreasonable to state that every other aspect of my life is unrecognisable from where I was.

I’ve learned an awful lot about myself along the way and I will continue to learn an awful lot about myself in the future; I am ever evolving and no matter how much we might want life to stand still on occasion, it has absolutely no intention of doing so, so we must all keep moving, keep learning and keep growing. However, I can say without a shadow of a doubt that I am a better person right now than I was. I am a happier person right now than I was.

I believe we all have a path. Call it fate, or destiny, or whatever you choose, but ultimately I believe it is all one in the same. I believe that when we follow that path, we receive great things, we feel fulfilled, we are content. I believe that when we deviate from that path, or fight it, we start to feel unhappy, stagnant, bored, distracted, isolated, disconnected and any number of negative emotions that we ignore or brush under the carpet. For me, making the decision to find my way back to my path was a fully conscious and extremely painful one. I had to take every idea and concept I had ever had about my life and its trajectory and cast it all aside. I had to throw away a lifetime of plans and ambitions (of my own and of other’s) and start from scratch. From the beginning. Without a safety net and no light at the end of the tunnel.

I took a leap of faith.

The problem was, I had begun a process of awakening within myself and I had absolutely no way to shut it down. The universe was going to throw its all at me and I could either choose to embrace what was happening to me, or I could bury my head in the sand and those negative emotions would just begin piling up on top of me. I fought the decision hard. To be honest, I have fought an awful lot over the past year, but when the Universe has other ideas, there really is no point fighting, because, as a friend of mine likes to point out, it’s just going to keep coming for me till it turns up with a sledgehammer. As has been the case for me on many occasions. So, I made the decision to embrace my awakening. Boy, does the game really begin when you do that.

You see, a lot of people have this idea that a journey of self-discovery is all flowery and fluffy with lots of lovely, relaxing, meditations, when in reality, it’s a little more like being a rollercoaster that you have a kind of love/hate thing going on with and you can’t get off. The thing is, this particular path is inevitably painful. Aside from the actual, physical decisions that I have made and some of the brutal lessons I have had to confront head on, I have also had my fair share of reality inducing epiphanies. The sort where you actually get to look real hard and real close at the person you are, and the reasons you are the person you are, and either accept them, or let them go.

We become the idea we have of ourselves and we form an identity through the way we behave and the decisions we make based on the evidence and experience we have in front of us. The problem is, we’re under the illusion that we are solely affected by outside influences and we have a terrible habit of blaming an awful lot of our character of things that have happened to us along the way.

This is the hard bit.

Owning up to the idea that actually, we have always had a choice to react to everything in a different way, or in a better way, is pretty challenging. Taking responsibility for the people that we are, especially the bits we don’t like about ourselves, is not easy.  Confronting things that happened to me with a very realistic attitude and coming at them in my head from the angle that I actually feel about them, rather than the angle that I’ve convinced myself I should feel about them and then dealing with them emotions is not easy.

Stepping up to the plate and making myself accountable for everything that I do, say, think, and feel, in such a way that I recognise this is my journey, and my path, and no one can help me through this particular part can be lonely, and let me tell you, it is not easy. I’m not really selling this whole self-development thing, am I? Well, let me also tell you this…

I could not be happier.

I have a much better understanding of who I am now. For the first time in my life, I can genuinely and honestly say that I like myself and that I’m happy in my own skin. I’m not fighting against the tide any more. I’m not seeking my happiness externally, with things or ideas. I just am. I am happy.

I’ve been given so many wonderful gifts since I started this journey; it’s as if I’m being rewarded for progressing up my personal and spiritual ladder, which I suppose I am. I most recently completed my Reiki First Degree, something I have wanted to do for over 10 years but never thought I would get round to. It’s amazing what you manage to ‘get round to’ when you realise you deserve to put yourself first. And that’s it really, that’s what it’s all about; realising that you deserve to put yourself first. I’ve had a quote that’s gone round and round in my head ever since I started this whole thing, and one day I will have it emblazoned on a wall in my home, or maybe even tattooed on my body…

“You are a child of the universe; no less than the trees or stars.”

A problem shared is a problem halved ..right??

Be A Time Management Ninja 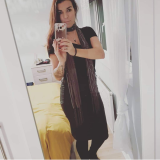