You can’t logic with a mental illness

Mental illness is a salient part of life and as such, many people are faced with the task of trying to help those who are suffering. In the process, people who genuinely want to help end up falling into the trap of saying ridiculous things like this: 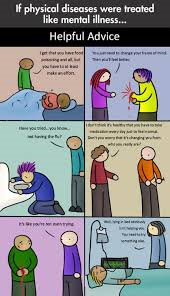 It can be incredibly hard to respond to a loved one telling you how they see the world. In my case, hearing my friend say that she didn’t want to live because she didn’t see the point left me feeling rather flummoxed.
Others were not quite so stuck for words, remarking at how it made no sense for her to feel this way because she threw herself at life and life is, of course, what you make of it. Others try to tell her that ‘the point’ doesn’t matter, or even that she is a clever girl so is more than capable of working out the point for herself. The general conclusion that everyone reaches is that she should just stop thinking about it.
And that, ladies and gentlemen, is how you make a suicidal self-harmer feel a whole lot worse. That is a sure-fire way to make them feel stupid and guilty, pushing them further into their spiral of despair.
There are several things that people forget to acknowledge when they’re talking to someone suffering with a mental illness. The first is that whoever they are talking to has thought about everything far more than they ever will. We’re talking night after night of deep, complex thought processes; questions with no answers. That, coupled with anxiety and stress, very easily leads to solidified thoughts that no one else has the depth of thought to argue with.
Which brings me to my second point; you cannot un-think a thought. You cannot tell someone to stop thinking something. Once the idea is there, it is there to stay. All anyone can do is change how they feel about that thought and control their minds rather than letting it control, or even consume them.
That really is how you help someone. Note that all addictions, from drugs and alcohol to sex or, in the case of all too many people, self-harm, have one thing in common; they all evoke intense feeling, be it pleasure or pain. They are desperate attempts to self-medicate by overwhelming powerful thoughts with even more powerful emotion. They don’t have to be anything to do with attention-seeking or cries for help and they are most certainly not signs of weakness. That is useful to know because it means that people really can be helped. Just not with blind statements of blame and blatancy.
You cannot logic with a mental illness. You cannot change what exists within the walls of a person’s mind. All anyone can really do is sit patiently and listen, not removing the thoughts, but making them just a little less scary.

Social anxiety- Is it serious or an attention seeking method?

Hello! I am a student who loves music and reading, as well as writing.